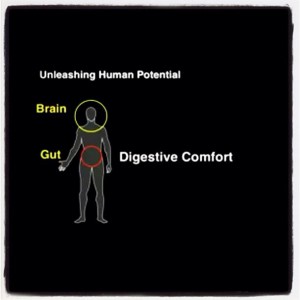 When discussing the Nervous System we typically talk about two divisions; the CNS and the PNS. However, there is a third division known as the Enteric Nervous System. This is the intrinsic nervous system of the digestive tract or gastrointestinal system.

The ENS consists of more than one hundred million neurones beginning in the
oesophagus and ending in the anus.

The ENS has been described as the ‘second brain’ for a number of reasons. It appears to be able to create a certain kind of ‘feeling’ with in the gut. Visceral sensations associated with emotion (think about your ‘gut reaction’ or ‘gut feeling’) such as ‘butterflies’ are actually sensed and conveyed by the ENS. Because the ENS plays such a major role in digestive process being nervous, anxious or upset can play havoc with your digestion leading to either diarrhoea, constipation or a combination of both commonly referred to as IBS!

If you suffer from IBS it is a sign your gastrointestinal system is under stress and you need to rethink your eating habits and exposure to stress! More than 90% of the body’s serotonin lies in the gut, as well as about 50% of the body’s dopamine, so gut health is of utmost importance, a happy gut makes a happy human!

We are Proud to be associated with NASM (National Academy of Sports Medicin...Detoxing The Hype
Scroll to top