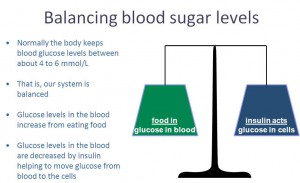 Let’s review the hormones; insulin and glucagon and their role within the body.  Carbohydrates are basically long chains of glucose molecules strung together.  When you eat carbohydrates the process of digestion breaks them down into their component parts – glucose.  When you eat a large meal laden with carbohydrates, insulin levels start to rise.  Insulin is secreted from the beta cells of the pancreas and plays a vital role in LOWERING blood sugar levels, so that excess glucose does not harm delicate tissues within the body.  Insulin acts as a transporter, shuttling glucose into the cells.  Glucose can be stored as glycogen in the muscles and in the liver, the key difference being that glucose stored in the muscles can only be used at the muscle site whereas glucose stored in the liver can be transported to where it’s needed.  However, if the amount of glucose ingested is in excess to the cells capacity for storage, and energy requirements at the time, then it will be converted into fat and stored in this manner.  This means insulin is also a FAT STORING hormone, especially around the abdominal area. Storage of fat in this area can also be a sign of a fatty liver as persistent high insulin levels encourage the laying down of excess fatty tissue in the liver! 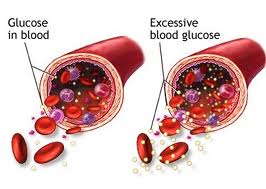 The point is that excess glucose CANNOT remain in the bloodstream as it can be detrimental so it must be stored in some way.

The brain needs around 120g of glucose per day, But the problem is that when insulin levels are high glucose is actually directed away from the brain, effectively starving it and putting us in a fat storing state.  In the last decade neuroscientists have identified an inability of the brain to properly utilise glucose in Alzheimer’s patients.  The interrelatedness of the brain and glucose use is so linked that very often alzheimer’s patients have diabetes and, those with type 2 diabetes have alzheimer’s!  This phenomenon is gaining attention and traction in the medical community so much so that a new type of diabetes is being posited – Type 3.  Insulin is an important chemical in the metabolising of fat but when a person’s brain develops insulin resistance this ability is very deterred.  The resulting build-up of fat increases inflammation and nerve stress both common factors in the development of diabetes and Alzheimer’s disease. 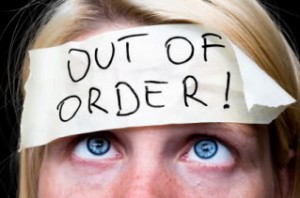 I am not suggesting that anyone completely cut out carbohydrates.  Even though we have a wonderful back up process called gluconeogenesis, whereby the body can make glucose from noncarbohydrate substances, this is not ideal. Especially if you want to be able to perform well in the gym- carbohydrates are critical.  The key issues are the amount, type and timing of carbohydrate consumption, avoidance is not a solution.

Carbohydrate consumption should centre on low Glycemic index options or complex carbohydrates, as these have a leveling and balancing effect on blood glucose levels due to the fact they are less insulinogenic than their high GI, simple carbohydrate counterparts. 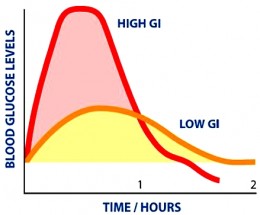 Glucagon is an equally important hormone but one that we don’t hear too much about.  While insulin is responsible for LOWERING BGL, glucagon is responsible for INCREASING BGL.  During a period of fasting (i.e. more than 5 hours without food) we still need a certain amount of glucose in our blood stream to provide energy for the brain and other tissues.  Glucagon is secreted from the alpha cells of the pancreas and signals to the liver to release some of its stores of glycogen to be used as energy.  This energy reserve is a vital part of our survival.  Historically our food intake was uncertain and glucagon allows us to go for prolonged periods without fainting, being dizzy, getting jitters or becoming ‘hangry’ –  or so it should.

The interrelationship between insulin and glucagon is a vital one, there is a delicate balance at play.  I believe that in the future there will be much more emphasis in the mainstream on the role of glucagon in blood sugar regulation than we have previously seen.

So, back to my clients problems – persistent and insatiable appetite, intense cravings for sweet foods, not being hungry all day and then craving sweet foods in the evening, or getting the jitters and feeling dizzy after 2-3hrs without food.  These are symptoms of a breakdown in that delicate insulin/glucagon relationship.  Our bodies are wonderfully adapted for coping with periods without adequate calorie or glucose intake, we evolved in a land of little and now live in a land of plenty.  Modern life has disrupted the delicate signals that have allowed our evolutionary success.

We should be able to go for a few hours without food with little detriment.  This is for a number of reasons 1) We have lots of stored glycogen in the muscles and in the liver 2) We have another high energy storage system that we SHOULD be able to tap into when needed – our fat stores.

Decreased insulin sensitivity can mean a few things, it can mean that the pancreas will secrete too much insulin and therefore blood levels will fall to below their normal baseline (leaving you hungry and craving sugar) or no matter how much insulin the pancreas secretes it has no effect on BGL as the insulin receptors on cells are effectively broken.

Imagine flicking a light switch on and off, eventually you’ll blow the bulb, or if you leave the light switched on constantly, it will eventually burn out.  Constantly overloading our system with high GI carbohydrates and the subsequent insulin spike effectively burns out our receptors.

Typically what I have seen with my clients who struggle to lose weight is that a) They either skip breakfast because they are not hungry, b) they have a high carbohydrate, low fat, low protein breakfast c) they use coffee as an energy crutch throughout the day and d) they have insatiable and persistent cravings for high sugar, sweet foods in the evenings.

The good news is you can do something about it!

Check out the blog next Friday for some simple things you can do to mitigate the risk of developing insulin resistance and to keep these hormones on an even keel!

Have a wonderful weekend!

Positives And Negatives of the Vegan Diet

Canning the Coffee…
Why PTI?

Easy ways to keep Insulin in check and control appetite!!
Scroll to top