There is a lot of confusion surrounding protein intake and recommendations for various individuals.  These range from the protein phobics who eschew larger amounts for fear of kidney damage and the overly zealous who gorge on protein at every meal.

Some say the former are wise and the latter wasting their money as we can only ‘absorb’ a certain amount of protein at once.

So this article aims to clear some of the muddy waters and whilst I usually avoid the ‘evidence based’* tagline, that’s exactly what the information here will be based on – evidence not hearsay!

Protein is an essential macronutrient meaning that we need to consume adequate amounts of it daily.  The exact amount is the topic of much debate and whilst we have general guidelines and parameters (from 0.8g/kg/bw to 2.0g/kg/bw), protein needs are very individual and will even fluctuate within individuals from week to week, month to month and also through the various stages of life.

But one thing is unequivocal – protein is important.

There are approximately 50,000 different protein containing compounds in the body with around 65% of these found in skeletal muscle.  In addition to its role as a macronutrient, protein plays a vital role in maintenance of our health, it has several functional roles within the body.

So, no doubt about it, protein is important stuff!

Protein digestion begins in the stomach where the proenzyme pepsinogen is converted to the active enzyme pepsin by HCl (hydrochloric acid). The digestion continues in the small intestine where enzymes from the pancreas and the brush border continue to cleave bonds and break the larger chains into smaller ones and eventually absorbable amino acids.

Contrary to popular belief there is no known maximum amount of protein that can be absorbed at any one meal, but it is generally accepted that around 95% and 85% of ingested animal and plant proteins are absorbed respectively.

Below is a table depicting these and also the ones that become conditionally essential in times of stress such as illness or exercising: 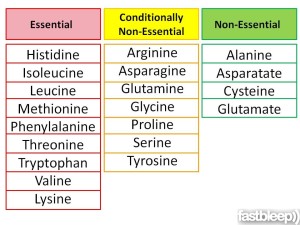 Whilst it is generally recognised that athletes, or those looking to gain muscular hypertrophy, should consume more protein, the bulk of the research shows that the single most important factor in gaining lean muscle mass is consuming a hyperenergetic diet (calories above maintenance level).  One pound of muscle tissue contains around 100g of protein therefore to gain 1 lb of lean mass per week an individual would have to ingest an extra 14g of protein a day (100g/7days).  It is vitally important to ensure that the body has sufficient energy for lean mass accretion and so a general guideline is 3-5kcals/kg per day above maintenance in addition to consuming some extra protein.

The recommended protein intakes are based solely on the weight of the individual and this causes problems for a number of reasons.  Firstly, because it does not take into account gender, height or body type, nor does it distinguish between lean mass and total body weight.  Secondly, because these recommendations were created from a viewpoint of carbohydrates being the basis of a healthy diet.  This means that by default if carbohydrates are to account for 55-70% of daily calorie needs then there is little room left for calories from protein and fat (the government guidelines state that only 9-12% of daily calories should come from protein!).  And thirdly, the recommendations have an upper limit of 2g/kg bw, but as we know protein absorption is highly individualised to the point that two people consuming the same amounts of protein per day may be in markedly different protein states (as determined by nitrogen status). This is because some proteins are more biologically available than others but also because protein adsorption can depend on the individual’s specific type and number of enzymes. 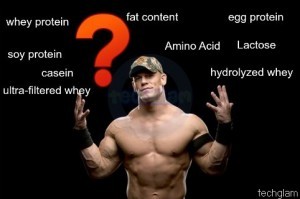 Another major contributor to protein absorption is the type of protein consumed.  Several studies have shown that diets high in animal protein are superior for muscle and strength gains compared to their vegetarian counterparts. And a spate of studies recently established that only the essential amino acids are necessary to stimulate muscle protein synthesis and the addition of non-essential amino acids offers no synthetic benefit.

It is important here to discuss briefly three of the essential amino acids known as the branched chain amino acids (BCAAs), Leucine, Valine and Isoleucine.  These have risen in fame recently in relation to their purported muscle building effects and improvements in performance.  They are also the topic of research relating to fasted training and mitigating muscle losses.  An increased intake of BCAAs, especially leucine, is thought to have a positive effect on muscle protein synthesis and sparing, insulin signaling and the sparing of glucose use by the stimulation of the glucose-alanine cycle.  This can lead to more fat loss and sparing of lean tissue. This glucose-alanine cycle is the mechanism by which glucose homeostasis is maintained during periods of fasting or prolonged exercise.  During exercise, pyruvate is formed from the breakdown of glycogen (glycogenolysis) and glucose (glycolysis).  Within the muscle, BCAAs donate their amino group to pyruvate to form alanine which is then transported to the liver where it can be used to re-generate glucose.  This glucose can then be transported back to skeletal muscle to be used for energy. In this way BCAAs help to resynthesise glucose and thus provide a valuable source of energy. 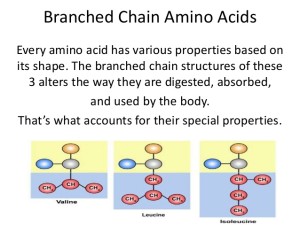 We now know that timing of nutrient ingestion influences the physiologic responses to exercise and that net protein balance can increase substantially when a protein and carbohydrate mixture is ingested before an acute bout of exercise compared with after exercise.  And that those receiving protein supplements immediately after an exercise bout see an increase in muscle size and strength as compared to those receiving the same supplement 2 hours after exercise.  In addition some studies show that a combination of protein and carbohydrate post exercise can enhance glycogen synthesis compared to ingesting carbohydrates alone and this points the the idea that protein supplementation is not solely a necessity for the bodybuilder but also for the intermittent sports and endurance athlete.

So can you have too much of a good thing? Is there a dangerous amount of protein? The short answer is no, unless you have a pre-existing kidney disease or disorder.  Study after study has proven that the risk of cardiovascular disease, kidney and liver failure and calcium loss have all been exaggerated and that high protein diets do not seem to increase the instance of cardiovascular disease (Harvard School of Public Health) and no study has ever reported liver or kidney damage due to increased protein intake in healthy individuals.  In relation to calcium loss, it is now widely accepted that the phosphate content of protein rich foods negates the effect of calcium losses (to buffer the acidic load) and protein ingestion is found to have a positive effect on bone health. However, reduced hydration status associated with higher protein intakes is a real issue. As the urea cycle processes the dietary nitrogen, water is eliminated via the urinary system, this can result in dehydration.  Therefore, those consuming higher protein diets should ensure that they drink adequate fluids and keep a close eye on their hydration status.

The issue is that as personal trainers (or recreational athletes) we don’t often have access to our clients kidney function profile and so should err on the side of caution and stick within the limits imposed.

Hopefully this has cast some light on the confusion surrounding total protein consumption, timing and type.  It is impossible to make concrete recommendations that can be extrapolated to be effective for broad populations.   Protein needs, intake and absorption are highly individualised and will vary from lifecourse to lifecourse and between training phases.

However, it is widely accepted that athletes, recreational athletes and avid gym goers should consume between 1.0 and 1.8g of high quality protein per kilogram of bodyweight per day (equivalent to 0.5-0.9g/lb/d).

*I usually avoid that particularly tagline because very often in performance nutrition and human nutrition, anecdotal and practice based research actually informs and forms the basis of lab based research.  In short sometimes if we wait on the research based evidence we are very much behind the curve.

Easy ways to keep Insulin in check and control appetite!!

To Hell and Back
Scroll to top