Metabolism is a term that gets bandied about a lot.  Some people blame their ever expanding waistlines on a decreasing or chronically low metabolism.  Supplement companies sell formulas that will magically ‘increase your metabolic rate’ and you are told that you metabolise the food you eat for energy.  So whats the deal? What is metabolism really all about? I hope to answer some of your questions and dispel some myths with this post.

At its most basic definition metabolism the sum of all chemical and physical processes by which the body breaks down and builds up molecules.  So metabolism can be split into two distinct parts – firstly, anabolism which is the building part (e.g. glucose -> glycogen,) and uses energy, and secondly catabolism the breaking down part (e.g. digestion) which releases energy. 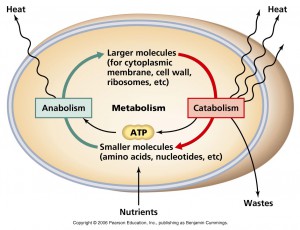 But the whole object of metabolism is so that you can produce energy to live and this means synthesizing a molecule known as adenosinetriphosphate (ATP).  ATP is the universal energy of all your bodily processes and the only energy currency the body can use.  Everything you eat and drink is used to re-make this vital molecule. 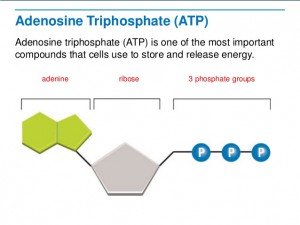 ATP consists of an adenosine molecule and three phosphates -there is also D-ribose but we will discuss that another time! In energy production, ATP has one of its high energy bonds broken (it is dephosphorylated) to give off energy, this gives us two new products ADP (adenosine di-phosphate) and an inorganic phosphate.  This ADP needs to gain a phosphate (i.e. be phosphorylated) from a donor, to be resynthesized to ATP so the process can begin all over again! 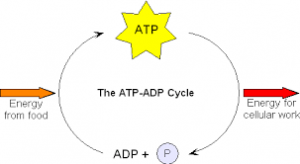 Our stores of ATP are very limited, this is why we need to eat and drink daily.  Resting stores of ATP ranges 20-30 mmol/kg dry mass which equates to about 3-5 seconds of high intensity exercise, consider that a sedentary person requires 60-70kg of ATP per day just to function and you can see the importance of food!

So we need to turnover large amounts of ATP and we achieve this via metabolic pathways which involves the breakdown (or catabolism) of free fatty acids, glucose or the stored form of carbohydrate – glycogen.  To breakdown these substrates we need the help of proteins known as enzymes.  Enzymes mediate chemical reactions and usually act as a biological catalyst – they speed up reactions.*

Carbohydrates are made up of carbon, hydrogen and oxygen molecules which is why you will sometimes see them abbreviated to CHO in various textbooks and blogs.  Carbohydrate exists within the body in two distinct and different forms – stored muscle and liver glycogen and glucose (in the blood).  We have these stores of glycogen so that we can produce energy even when we have no glucose freely available in the blood stream.  Stored muscle glycogen can only be used at the site where it is stored, whereas liver glycogen can be broken down and mobilised for use anywhere it is needed!

Our body will always follow the path of least resistance, for this reason it favours the metabolism of CHO’s as this is a quicker process compared to the metabolism of fats.  This has been shown in studies where CHO contribution to power output increases exponentially with exercise intensity.  That means that the relative contribution of CHO and fat to energy production is directly affected by the intensity of the activity. You are all sitting reading this, using your aerobic energy system and therefore burning (or oxidising) fat for energy – provided you haven’t recently hocked down a massive meal of fast digesting CHO’s!!  But when the intensity increases so too does the contribution of CHO’s to energy production to the point where CHO accounts for 90-100% of energy produced at very high exercise intensities. 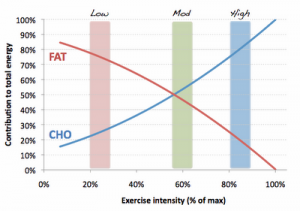 However, the body is a highly adaptable machine so with training we can increase our ability to burn fat at the same absolute intensities.  This means that when you first start running, for example at a 10k pace, your body will be burning predominantly CHO’s but as you adapt to that training stimulus (via various methods including mitochondrial biogenesis and an increase in the enzymes required for the breakdown of fat) you increase your ability to burn fat at the pace. 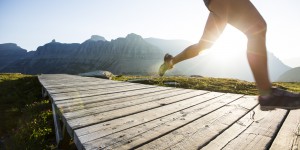 This concept forms the basis for energy production during long endurance training whereby if we exercise for long periods at low intensity, without the addition of CHO’s, we will oxidise fat for energy.  Whilst this sounds great it will have negative implications for performance – how will you manage a sprint finish if you have no CHO availability?  Fat utilisation during exercise may be great for body recomposition, but it can be detrimental to performance.

The availability of glycogen plays a significant role in exercise ability but endogenous glycogen stores are depleted after only 60-75 minutes.  And if that training is interval style then stores will be depleted quicker.  Consider a football match, this involves intermittent exercise, periods of running, jogging, sprinting and kicking because of this the players need a high CHO diet prior to match as studies have shown that a low carbohydrate diet has severely negative effects on performance!

Carbohydrates are vital for exercise performance but we have a finite capacity for storage (unlike fat which we have an infinite capacity to store!).  Glycogen storage includes:

So how do we ensure we have adequate glycogen stores so that we can perform to the best of our ability? It all depends what we eat!  Carbohydrates exist in different forms and I’m not talking about chips, crisps and potatoes! The first kind are monosaccharides, these are the simplest form of CHO and there are three types, glucose, fructose and galactose.  The second kind are disaccharides these are two monosaccharides joined together e.g. two glucose joined together = maltose; fructose plus glucose = sucrose; galactose + glucose = lactose.  The third kind are polysaccharides, three or more monosaccharides joined together, and these can be long chains eg Amylose (straight), or branched like Amylopectin.

When we ingest, digest and absorb CHO’s what happens next?  Well this is entirely dependant on the Glycemic Index of the CHO consumed.  The Glycaemic Index (GI) is a ranking of carbohydrate-containing foods based on the overall effect on blood glucose levels.  The GI scale runs from 0-100 with 70+ considered as high; 50-69 considered medium and <50 considered low.  The glycemic index of foods consumed has many implications, not least for insulin secretion i.e. the consumption of high GI foods can result in reactive hypoglycemia, whereby too much insulin is produced from the beta cells of the pancreas and consequently reduce blood glucose levels below baseline. 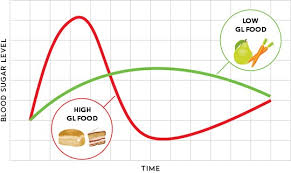 In addition we also have another way to measure the effect of CHO’s on blood glucose levels and this is the glycemic load (GL) of foods. GL takes into account the quality and quantity of the CHO source and we can calculate GL by multiplying GI x  the weight of food in grams (GL = GI x Weight (g)).

Studies have shown consistently that consumption of low GI foods results in greater satiety – excellent if you are trying to restrict calories. This is due to a number of reason but primarily because with the slower rate of digestion we don’t see the same insulin spike associated with high GI foods and therefore blood glucose levels do not drop as low avoiding reactive hypoglycemia and the hunger that accompanies it.

When we eat CHO we will store whatever we don’t use at the time.  When our muscle and liver glycogen storage capacity is reached we then convert glucose to triglycerides for storage in adipose tissue – this is why excessive consumption of carbohydrates can lead to an increase in fat mass!

No we have full muscle and liver glycogen stores, how do we metabolise these to gain energy?  It is a multi-step process which includes two distinct phases.  Firstly the glycogen must be broken down into glucose -1 -phosphate via a catabolic process called glycogenolysis, this initial step requires some energy – you have to speculate to accumulate! A simplified version of this reaction is shown below:

The Glucose -1-Phosphate is further broken down in the presence of an enzyme called phosphoglucomutase to Glucose -6-Phosphate and this is a key metabolic step, since glucose-6-phosphate can go into several different pathways. If energy is needed immediately, it goes into glycolysis in liver or muscle cells. Glycolysis as part of aerobic respiration will result inthe complete breakdown of glucose, and the glucose-6-phosphate is broken down to generate adenosine triphosphate (ATP). Which as you now know is a source of fuel for the cells.

SO what does all this mean? Basically in the presence of oxygen we can achieve the complete breakdown of a glucose molecule to produce a lot of ATP.  If we are exercising anaerobically (i.e. higher intensities) then we can still produce ATP but at a much lesser amount and cannot fully break down the glucose molecule and so produce a fatiguing waste product known as lactic acid which contributes to the burning sensation you feel during high intensity exercise!

Carbohydrate is essential for exercise performance, but the average gym goer gets more than enough in their diet to replenish lost glycogen stores.  This means if you are exercising 3-5 time a week for 1 hour or less you have no need for excessive CHO consumption or sports drinks – skip them! The type of carbohydrate you eat (high or low GI) has implications for your blood glucose and satiety levels so if you are trying to lose weight stick to low GI CHO sources. 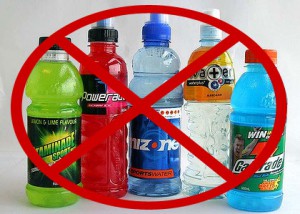 This is a very simplified overview of carbohydrate metabolism and its implications for exercise performance.  For more information I recommend  Biochemistry for Sport and Exercise Metabolism (Wiley SportTexts) By James Morton and Donald MacLaren.

Our 2020 Course Timetable Is Now Complete

Easy ways to keep Insulin in check and control appetite!!

What are you training for?
Scroll to top