Diabetes is a growing problem.  More people than ever before are being diagnosed and as Personal Trainers, we have an opportunity to help this population of clients who are often left without help or hope!

SO……last weekend I started my Active IQ Level 4 Certificate in Physical Activity and Weight Management for Obese and Diabetic Clients!

Check out the link below for more information on the course:

Super excited about this so I decided to impart some statistics and information related to this condition, this week’s blog will focus primarily on diabetes, it’s history, prevalence and treatment but I’ll discuss methods for prevention, Obesity and Metabolic Syndrome in subsequent posts.

A recent study published in the British medical journal The Lancet, reported a 45% rise on the prevalence of diabetes worldwide from 1990 to 2013.  The main increase was in Type 2 diabetes, which is the most common form of the disease and usually directly linked to obesity.  This rise is coupled with statistics reported in another study, also published by The Lancet in June 2015, which states that an estimated 592 million adults will have diabetes by 2035!! The study was the largest analysis of global disability data to date, drawing on more than 35,000 data sources in 188 countries.  These are scary predictions that are sure to leave individual households and indeed wider public healthcare systems struggling under the weight of care needs.

Whilst we consider diabetes a modern day disease it has been around for a long time- in 1552 BC Ebers Papyrus contains the record of the earliest reference considered to be about diabetes, by an Egyptian physician, Hesy-Ra; he listed remedies to combat the ‘passing of too much urine’. Fast forward a few centuries to 1425 AD when the word ‘diabete’ first appears in the English language. Or to 1674 when Professor thomas Willis of Oxford University describes the sweet flavour of urine in those with diabetes mellitus – the mind boggles with though of how he assessed this! Let us fast track further forward to 1797 when Scottish physician John Rollo created a therapy for diabetics by placing his patients on an animal food only diet, consisting of blood pudding, fats and meat.  Wasn’t he ahead of his time with his ‘low carb’ approach? I’m not quite sure about the blood pudding though….eugh! And so to modern(ish) day when in 1959 researchers identified Type one and Type two diabetes – one requiring insulin and the other not.

We think of it as a modern ailment because the prevalence has increased so much in such a short space of time! If we are to follow John Rollo’s advice would it be prudent to assume that the ‘war on fat’ and rise in consumption of excessive amounts of high GI carbohydrates are to blame.  If we look at the data it’s hard not to see a pattern emerging: 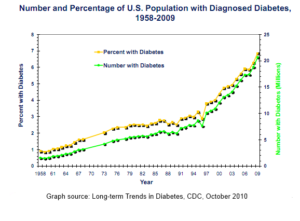 Although these figures are for America, unfortunately where the US go we tend to follow.  Since 1980 (and the birth of the low fat movement in mainstream media), age-standardized diabetes prevalence has more than doubled in men and increased by 60% in women worldwide.  This rise in prevalence has been compounded by population growth and aging, nearly quadrupling the number of adults with diabetes over these 35 years!

So what is Diabetes?

The WHO (no not the band), states that diabetes is a ‘metabolic disorder characterised by hyperglycaemia with disturbances of carbohydrate, fat and protein metabolism resulting from defects in insulin secretion, insulin action or both’.  The Merriam Webster medical dictionary mirrors this definition adding that symptoms include ‘excessive urine production, with excessive amounts of sugar in the urine and blood’.

Diagnosis of the condition is usually undertaken after a patient presents with symptoms, such as excessive thirst, unexplained weight loss, frequent urination, blurry vision, cuts that won’t heal and fatigue:

Definitive diagnosis takes the form of the following tests to assess blood glucose regulation.  Typically a high plasma glucose result can be a prominent indicator, a random result of >11.1mmol/l or a fasting result of >7.0mmol/l can usually prompt the administration of a third test – the Oral Glucose Tolerance test.  The OGTT involves ingestion of 75g of glucose followed by a blood test two hours later, a result above 11.1 mmol/l confirms a diabetes diagnosis. 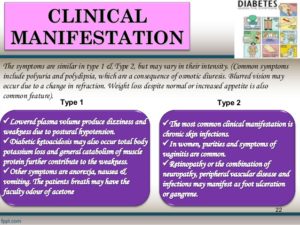 These tests are used for diagnosis of both Type 1 and Type 2 diabetes.  However, there is another test that can be used in relation to Type 2 diabetes this is HbA1c test and measures the amount of glycation of red blood cells over the last 3 months.

Type One Diabetes is known as insulin-dependant as it’s characterised by the functional loss of insulin producing cells in the pancreas, the beta cells of the Islets of Langerhans.  Type one accounts for about 5 – 10% of diabetic cases in the EU and North America.  It is considered an autoimmune condition and can present in infants and children.  It is said to be unrelated to weight, diet and lifestyle.  Treatments include insulin therapy via short or fast acting insulin and intermediate or slow acting insulin. Insulin therapy has a few side effects not least weight gain, in addition the injection sites must be rotated.  Injecting in the same place much of the time can cause hard lumps or extra fat deposits to develop. These lumps are not only unsightly; they can also change the way insulin is absorbed, making it more difficult to keep blood glucose on target. 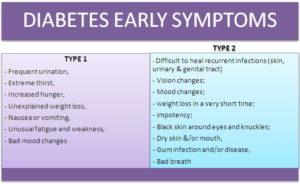 Type Two Diabetes used to be called Adult Onset Diabetes as typical onset is 30-50 years old and now accounts for around 85% of new diagnoses! Unfortunately it is on the rise in children and those in their teens and twenties.  It is more a case of insulin resistance as opposed to absence of production.  The insulin receptors on cells effectively become ‘furred up’ with fatty deposits and so insulin cannot bind and therefore glucose cannot enter the cell. There is a high correlation with poor nutrition, excessive weight and low exercise participation in diagnosed individuals.

As a first line defense this type of diabetes can be managed through nutrition (dietary intervention) and increased physical activity.  However, as the condition progresses, medication may need to be administered and Metformin is the initial treatment. Metformin works by inhibiting hepatic gluconeogenesis and enhances insulin sensitivity in muscle and fat cells. Side effects include nausea, lactic acidosis with this medication not being suitable for patients with renal dysfunction.

If unchecked and if dietary interventions are unsuccessful then other protocols are employed to manage the disease and the sufferer may eventually end up needing injectable insulin.

The global prevalence in 2012, as outlined by the IDF, was 8.3%.  This is predicted to rise to 10.1% by 2035.  On a global scale diabetes is considered an epidemic in many low and middle income nations, with a slight increase in the number of male sufferers (198 million) compared to female sufferers (184 million). 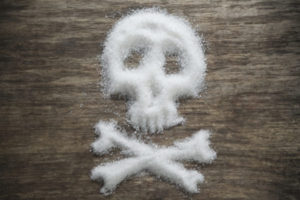 As obesity and Type 2 Diabetes appear to be inextricably linked, the rates of diagnosis are predicted to increase along with increasing rates of obesity.  Unless interventions are successful at earlier stages and a sound programme for exercise and better nutrition is implemented then the ‘Diabesity’ problem is set to reach epidemic proportions worldwide. This will have corresponding negative implications for healthcare systems, not least the NHS here in the UK.

I have been shocked and saddened by the statistics we covered so far, and to be honest a little annoyed as Type 2 diabetes is a largely avoidable disease. With some of the information in this blog it would be easy to point the finger and say that people with Type 2 diabetes have ‘brought it on themselves’. However, I believe the problem runs much deeper than that, and the solution is certainly NOT as simple “eat less and exercise more!”.  The major contributing factor is lack of education about good nutritional choices, and given the absolute shitstorm of conflicting information out there it’s not surprising people are at a loss.

So what about prevention and avoidance?

Well next time I’ll discuss in more detail the normal blood glucose ranges, and how you can help stave off Type two diabetes or at least give yourself a fighting chance. In addition we will look at a collection of issues known together as Metabolic Syndrome!

Much more information to come!

In this journey of life its very important to always be learning – to constantly and consistently grow as a person, to continue professional development in work and career.  There are few industries where this is as paramount as in the Health and Fitness Industry.  As the extent and pace of research increases so too does our knowledge potential, but to avail of this we must keep learning!!

This course is something I have wanted to do for a while – it has a lot of personal resonance for me.  My dad is Type 2 and I’ve suffered from pancreatitis since I was 17.  I feel that knowledge and certification in this area of specialism will prove invaluable for the future so that I can help family and clients alike.

It isn’t easy to find the time to commit to something, very few of us have a couple of free hours every day, but if you want to succeed, to keep achieving you will MAKE the time!!! Plan and prepare ahead, schedule your day and week, and actively work towards becoming the best version of yourself!!

Until next time, have a great week 😀

Positives And Negatives of the Vegan Diet
It’s Your Journey

Are you a Grower and not a Shower?
Scroll to top